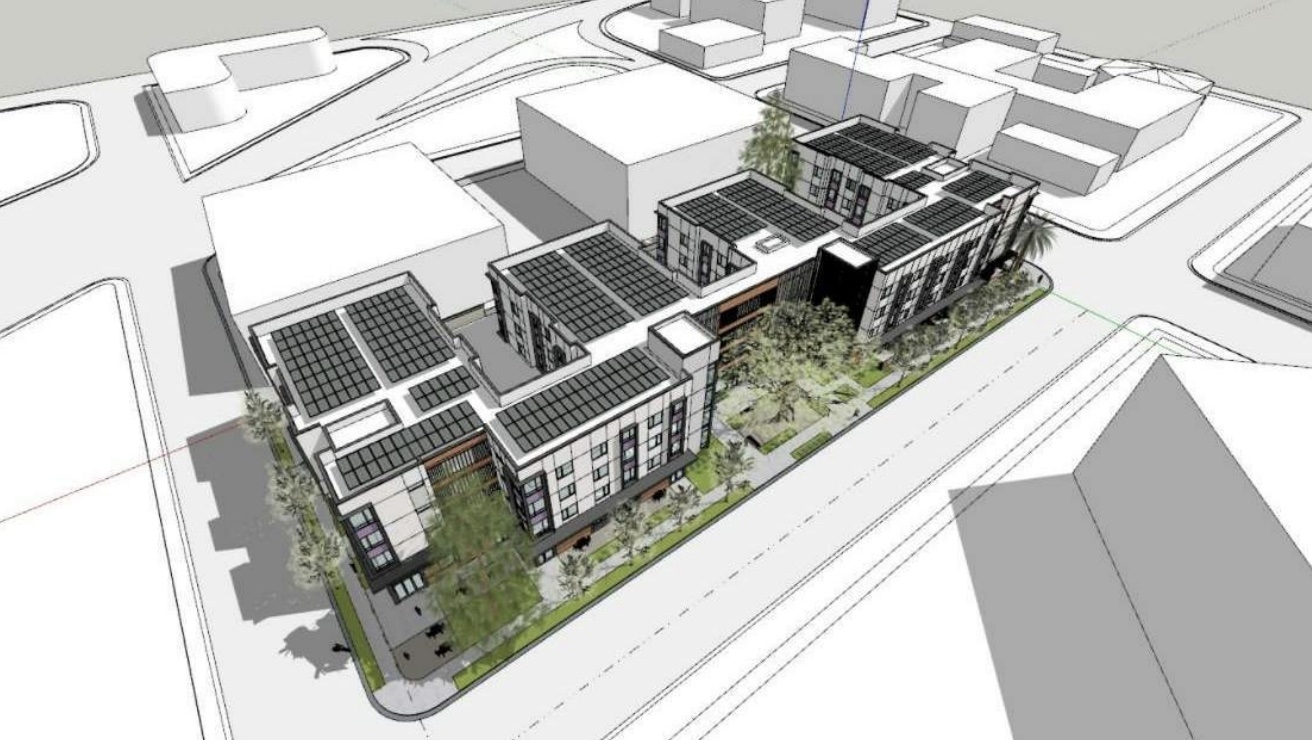 As Palo Alto continues to lag in its effort to build affordable housing, Santa Clara County is advancing its own plan to create an apartment complex for teachers in neighborhood that is already undergoing a dramatic transformation.

The county’s plan, which the City Council will get its first look at on Monday night, would bring 110 apartments to 231 Grant Ave., across from the Palo Alto Courthouse in the California Avenue business district. Developed by nonprofits Mercy Housing and Abode Communities, which specialize in affordable housing, the apartments would be open to teachers and school district employees from participating districts in Santa Clara and San Mateo counties.

Unlike other proposed developments in Palo Alto, the Grant Avenue development would be built on county land and, as such, does not require formal approval from the city. The county enjoys “sovereign immunity” when it comes to adding government functions and, as such, has the power to exceed the city’s zoning rules.

To date, county staff had signaled their intent to adhere, to the extent feasible, to the development standards in the city’s recently created “workforce housing” zone, according to a new report from the city’s Department of Planning and Development Services. At the same time, the project exceeds several design standards. With a height of 55 feet, the apartment complex would exceed the city’s 50-foot height limit. Its density of about 80 dwellings per acre is twice the number that the city typically allows in its multifamily zoning districts (RM-40). The recently created workforce zone, however, does not set limits on units per acre.

The project’s building density, however, falls below the city’s limits. The proposal would have a floor area ratio (FAR) of 1.85, below the 2.0 FAR allowed in the workforce housing zone. And even though it would exceed some development standards, city staff had concluded that the project is “generally consistent with the City’s housing goals, which express an interest in providing high density multi-family housing near transit,” according to a report from the Department of Planning and Community Environment.

Plans for the project show two C-shaped, four-story buildings, each with a courtyard. A third courtyard separates the two buildings. The project also includes a community room and a “flex room,” which could accommodate a café or another use, at the portion of the property closest to the corner of Grant Avenue and Park Boulevard. An at-grade garage behind the apartment buildings would include 112 spaces for cars through the use of stacked parking structures, along with 134 spaces for bikes. A report from the county’s Facilities and Fleets Department notes that the project’s “proximity to transit and farmer’s markets, groceries, shops, restaurants, parks and libraries can help residents reduce trips for daily tasks, cutting down on vehicle miles traveled and greenhouse gas emissions.”

If the county Board of Supervisors ultimately approves the project, as is expected, the apartments would go up in an area that is already going through a dramatic transformation. The teacher complex will go up just blocks from the city’s newly built parking garage at 350 Sherman Ave., and from an adjoining site at 250 Sherman Ave. where the city is about to commence construction on a public safety building. The housing complex would replace an existing office building near the intersection of Grant and Park Boulevard. The project is also just a few blocks from the Ventura neighborhood, where the city is preparing to adopt a new land use vision with the goal of encouraging more housing, park space and community amenities. 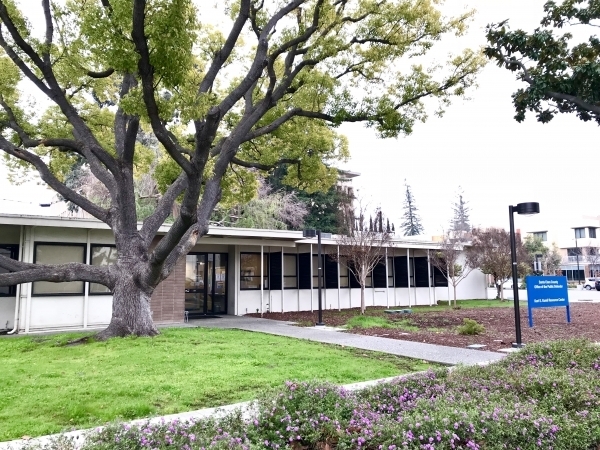 A Santa Clara County-owned site at 231 Grant Ave. in Palo Alto will become an apartment complex for teachers and school district employees in San Mateo and Santa Clara counties. Photo by Elena Kadvany.

While city and county staff have been discussing the teacher housing project for nearly two years, the Monday hearing will give the council and residents their first chance to offer feedback on the preliminary plans for the proposed development, which will go through the environmental review process later this year.

So far, the city has requested that the county refrain from adding any curb cuts along Park Boulevard, a popular bike route. The city is also urging the developers to consider measures to regulate the volume and speed of traffic in the area. Claire Raybould, a senior planner at the Department of Planning and Development Services, also requested that the county consider the cumulative traffic impacts of both this project and the concurrent construction of the city’s new public safety building. This includes ensuring that adjacent properties maintain their access to the streets during construction.

“Coordination between the County and City of Palo Alto must occur to minimize potential impacts associated with street closures, vehicle deliveries and other construction activities,” Raybould wrote.

The Grant Avenue project was spearheaded by county Supervisor Joe Simitian, who in 2018 suggested using county land for teacher housing. The county and the city agreed that year to commit $6 million and $3 million to the project, respectfully. The county approved its partnership with Abode Communities and Mercy Housing in August 2019 and Facebook gave the project a boost in October 2019 with a donation of $25 million.

In a Thursday statement, Simitian said that “no one wins when local teachers have to commute from miles and miles away.”

“It’s just that much harder to attract and retain the best teachers available,” Simitian said. “Time in the car is time not spent with students or preparing lesson plans. And our teachers become more and more remote from the communities where they teach.”

Teri Baldwin, president of the Palo Alto Educators Association, said in the statement that the local school district has teachers who commute from Gilroy, Morgan Hill, Aptos and Dublin.

“This long commute takes a toll on our teachers’ quality of life and decreases the value of their salaries,” Baldwin said. “It also adds to traffic and pollution problems in the county.

“When teachers live in or near their school communities, students also benefit. We want to be part of the community we teach in. We want to organize or attend after school events and support and encourage our students.”

The county plans to go through the design and environmental review processes this year, with the goal of launching construction in August 2022 and completing the project in February 2024.