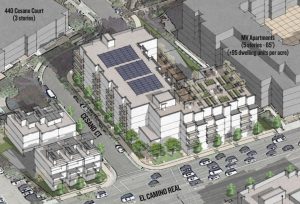 A new housing development with 55 condominiums, six townhomes and six accessory dwelling units could go up on the southern tip of Palo Alto under a proposal being pitched by developer Toll Brothers.

Like several other recent developers, including the plan to replace Creekside Inn in the Barron Park neighborhood, the proposal for 4345 El Camino Real is banking on a conversion of the commercial site to “planned home zoning,” a designation that allows home builders to exceed local development standards. Palo Alto introduced the new zoning designation in 2020 but has yet to see any projects get built through the highly discretionary process.

If approved, the Toll Brothers project would span two El Camino Real properties on either side of Cesano Court, according to project plans. The condominium building would replace Country Inn Motel on a parcel immediately next to the city’s borders with Mountain View and Los Altos.

The other El Camino Real parcel would feature six, three-story townhomes, each with an attached accessory dwelling unit. The residences would stand on a commercial site currently occupied by Massage Envy. The townhomes would feature roof terraces, front stoops, balconies and ground-level green space for landscape and gardens, according to the application.

“This project will provide unique high-quality buildings and spaces consistent with the highest building standards of Toll Brothers,” the plans state.

Like other “planned home zoning” projects, this one would exceed the city’s typical zoning rules. The condominium building would be about 60 feet tall, exceeding the city’s 50-foot height limit. And the residential density would be 56 dwellings per acre, which is higher than Palo Alto’s typical standard of 40 dwellings for high-density multifamily districts.

While far less ambitious than the Creekside Inn proposal, which consists of 382 apartments, the Toll Brothers project similarly represents a litmus test for the City Council as it considers exemptions to the city’s height limit, which has been around since early 1970s.

To make the case for its proposed height, Toll Brothers is pointing to similar projects in Mountain View and Los Altos, next to the project site. These include a 65-foot-tall residential development just south of the proposed condominium building, on the Mountain View portion of El Camino Real, and a planned 63-foot-tall housing project across El Camino Real, in Los Altos’ jurisdiction.

“Toll Brothers is also arguing that flexibility with density regulation is “necessary and suggested by staff with the goal of providing more housing in Palo Alto.” The 67 dwellings that the developer plans to build will “help to address the City’s housing needs and improve the City’s jobs-housing balance,” the application states.

Because the sites are currently zoned for commercial use, Toll Brothers would require a zone change, which gives the council broad discretion to deny the project or require revisions. At the same time, it is consistent with the city’s effort to rezone commercial and industrial sites for residential use, a key strategy as Palo Alto strives to meet a regional mandate for 6,086 new dwellings by 2031.

As a “planned home zoning” project, the proposal would be subject to a pre-screening hearing in front of the council. The hearing will allow council members to offer initial comments before the developer decides whether to file a formal application.