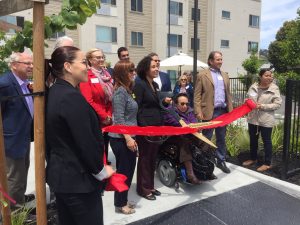 Hana Gardens Senior Apartments is a 63 unit mixed-use senior affordable housing community adjacent to City Hall and within El Cerrito’s mid-town area. The development includes a new public plaza which celebrates the legacy of the Japanese American flower growing community of El Cerrito as well as the preservation of an existing building which belonged to one of the local Japanese American families interned during World War II. 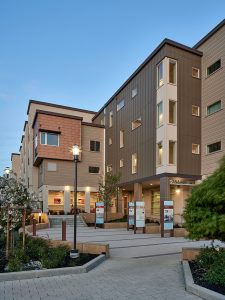 The plaza and public areas around the development include numerous interpretive displays, designed by West Office, with panels and plaques exhibiting information about the Japanese American community and about the site itself. On the ground floor is the new El Cerrito Senior Center at Hana Gardens which is open to San Pablo Avenue and will serve Hana’s residents and the El Cerrito community.

The design of the new mixed use/senior housing development takes its cue from City Hall as the building steps back and incorporates a public plaza. At the same time, the building steps down to meet the one story existing flower shop building along the South side. The building is sited around an internal courtyard for residents and the public plaza adjacent to City Hall on the North side. The design of the new mixed-use / senior community incorporates, respects, and enhances its context and City Hall’s civic realm. 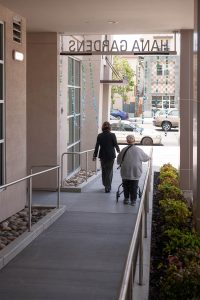 Hana Gardens follows the principles and guidelines of the San Pablo Specific Area Plan and includes a high commercial ground floor, establishes an articulated urban presence on San Pablo Avenue and provides a public open space which can serve as a gathering place for residents of the City of El Cerrito.

Eden Housing honored the rich history and tradition behind the property and its namesake, “Hana” is often translated from Japanese into English as “flower”, by starting the event off with Taiko drummers and organizing volunteer groups to do paper flower crafts with the residents and community.