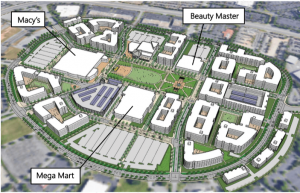 The Gwinnett County Board of Commissioners earlier this month adopted a plan to redevelop Gwinnett Place Mall with equity in mind.

In approving the plan submitted by HR&A Advisors, board members agreed to strategies including affordable housing and neighborhood services on the mall site, a small business loan program in the area and a countywide affordable housing trust fund, among other strategies.
The plan came out of a study on how to redevelop the nearly-abandoned mall near Duluth with marginalized communities in mind. The consultants received input from more than 2,000 Gwinnett residents, according to a news release from the county.
Explore Gwinnett Place study recommends housing, neighborhood services.

Commission Chairwoman Nicole Love Hendrickson said in the release that the plan will set a new national precedent for equitable redevelopment.
“The plan can respond to community needs, create an innovative cultural destination and attract new economic opportunities,” Hendrickson said.
Consultants first presented the plan in June to commissioners. Its formal approval means the county will include it in a request for proposals from developers.
Gwinnett Place Mall was built in 1984 and led an economic boom in the area, which was considered the county’s unofficial downtown until the mall began to decline at the turn of the millennium. The county bought 39 acres of the mall property last year for $23 million.
The area around the mall is among the most diverse in the South, with many immigrant-owned businesses but high levels of economic and housing insecurity, according to the equity study.
ExploreMore stories about Gwinnett County
“As the commissioner who represents Gwinnett Place Mall, I have always been focused on ensuring this area can remain the economic heart of Gwinnett County, and that the redevelopment that the county supports in this area is beneficial to those who live and work there,” District 1 Commissioner Kirkland Carden said in the release.
The Gwinnett Place site revitalization team, which includes officials from the county, Gwinnett Place Community Improvement District, Atlanta Regional Commission and a private planning firm, is proposing a mixed-use development on the site mostly focused on multi-family housing, with a park and a cultural center. The design envisions international restaurants, cultural shops and flexible co-working office space in the development. A greenway trail connected to the countywide trail network would circle the site and a new transit center is being designed nearby.
Most of the existing mall would be demolished.