The firm planning the redevelopment of Gwinnett Place on Friday released two proposed conceptual designs of the site, a milestone after years of occasionally eccentric dreams for the nearly-abandoned mall’s future.

“It’s not going to be a mall anymore,” said Rick Williams, architect and urban designer for Van Meter Williams Pollack, at a Wednesday open house at a hotel near the mall. “It’s going to be an outdoor activity center with some new retail, but it’s also going to be a neighborhood with residences.”

Gwinnett County last year bought 39 acres of the property for $23 million. The county now owns much of the mall building and pieces of surrounding parking lots leading to major roads in each direction.

The proposals call for the demolition of the mall structure except for Macy’s, Beauty Master and Mega Mart, which retain ownership of their stores and parking lots. What is now the mall’s central space would become an outdoor park, potentially including an amphitheater, with small local businesses on its fringes.

The development site would have new food-oriented retail strewn throughout, Williams said. Much of the parking lot space over time would become medium or high-density housing complexes with their own parks, open space and retail.

Bike and pedestrian lanes would be added to Ring Road, which surrounds the mall. It would connect to nearby parks and the Gwinnett County Transit Center northwest of the site.

One of the proposals envisions the site as a mixed-use town center, while the other, more ambitious proposal calls it a “cultural district.”

The cultural district would contain more residential units, in buildings four to six stories high on average, and twice as much office and retail space. It would have a cultural center with space for performances, events, classrooms, an international library, a language lab, nonprofit offices and incubator space for food service businesses. It would have structured parking and would develop at a faster pace.

The cultural district proposal would be more attractive to visitors from outside the Gwinnett area but require more public investment, said Allison Stewart-Harris, community planning manager for Vanasse Hangen Brustlin, the firm leading the revitalization strategy. “We want to make sure people will also see the financial side of that,” Stewart-Harris said.

The final plan should contain housing for a variety of income levels, including “workforce housing” for families with modest incomes and possibly subsidized housing developed by nonprofits with county assistance, Williams said. 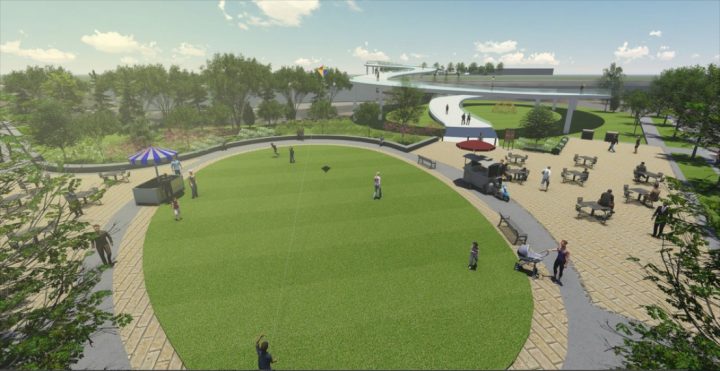 The Gwinnett Place Community Improvement District also displayed the two designs on Friday and Saturday at the International Night Market in Suwanee.

The public can see more information and weigh in online at https://gwinnettplacetobe.com/home/our-voices/

Based on feedback, both proposals will be consolidated into a single draft plan, which will be presented again to the public at the May 14 cultural festival at Gwinnett Place.

The county commission, which is also studying how to develop the site equitably, will have the final word on the plan.

The revitalization strategy should be finished by September, but malls often take at least a decade to redevelop, Gwinnett Place CID Executive Director Joe Allen said.

Gwinnett Place quickly grew popular after its 1984 opening, attracting more businesses to the surrounding area, which for a time became the county’s unofficial downtown. The mall, like others nationwide, has declined in the past two decades. Past proposals for its redevelopment included high rises, a cricket stadium and small farmsteads surrounded by a moat.

The area around the mall is now among the state’s most diverse. Census tracts within 2 miles of the mall were nearly evenly divided between Hispanic, Black, White and Asian American residents two years ago, with each group making up 20-30% of the area population.

Art Sheldon, 67, moved a mile away from the mall in 1995 when it was still active and busy, with five major department stores. “I moved here because the mall was here and it was good to live near shopping,” he said.

As he got older, Sheldon said, he needed to shop less. At the open house, he agreed with the site team’s conclusion that the area is already oversaturated with retail. “I’m looking at, hopefully, a lot of office and employment,” he said. “That’s the main thing. The other thing is affordable housing.”