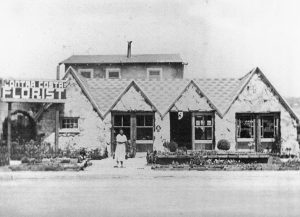 Established in 1986, the Governor’s Historic Preservation Awards are presented annually under the sponsorship of the California Office of Historic Preservation (OHP) and California State Parks to projects, individuals, and organizations whose contributions demonstrate significant achievements in preserving the heritage of California.  The Hana Gardens Team is honored to receive this year’s award for the preservation of Contra Costa Florist Building which “represents a successful public-private partnership that preserved a tangible link to a community’s heritage while also making this historic building a central part of an affordable senior housing project.  The building is a remnant of the well-documented community of Japanese American nursery owners and others associated with the flower industry in western Contra Costa County during the first half of the twentieth century.”

Congratulations to the VMWP team: Rick Williams, Ben Chuaqui, and Andrew Faulkner, as well as our partners at Eden Housing, West Office, East Bay Housing Organization, Tom Panas at the El Cerrito Historical Society, and the City of El Cerrito on this honor.

To learn more about the history of the Contra Costa Florist Building and the community effort to preserve its proud history, read below.

The Contra Costa Florist building is a rare remnant of the well-documented community of Japanese American nursery owners and others associated with the flower industry in western Contra Costa County during the first half of the twentieth century. The appearance of the building is connected to an even earlier era of El Cerrito history – the quarrying industry. It was originally built in the 1920s to house the sales office of the Valley of the Moon quarry in Sonoma. The Florist building’s stone façade reflects this heritage, and it is unique among buildings on San Pablo Avenue.

From the mid-1930s to the mid-1960s, Contra Costa Florist was run by Hikojiro and Tomi Mabuchi. By 1942, when people of Japanese ancestry living near the West Coast were forced into incarceration camps, abruptly leaving their homes and businesses, there were 20 families that owned nurseries in Richmond and El Cerrito. There were additional Japanese Americans who worked in the nurseries. Descendants of these nursery families still live in the area. During the Mabuchi’s years in the Topaz camp, their property was preserved for them by the Fred Conwill family, owners of Tradeway Furniture, a neighboring business. Thanks to the Conwill’s efforts, the Mabuchi’s were able to resume their business at the original location upon their release from the internment camp in 1945.

In 2010, when the City of El Cerrito first sought to develop senior housing on the site of the Contra Costa Florist and Tradeway Furniture buildings, neither building was deemed to be of historical or cultural significance and the project plan specified razing both buildings. Tom Panas of the El Cerrito Historical Society, local citizens, and Flora Ninomiya and Laura Iiyama of the Japanese American Citizens League, brought forth information they had spent years gathering about the Florist building’s historic and cultural significance. They shared information about the locations of other greenhouses and florist businesses of the area, and the stories of the associated Japanese American community in West Contra Costa County. As a result of this information and community response, the City of El Cerrito, and the developer Eden Housing, soon agreed that the preservation of the building needed to be considered.

Eden Housing proved to be flexible and patient in working through issues, and was committed to reaching out to and responding to the community. They revised their plan and made a commitment to preserve and re-construct the Florist building, and to preserve the exterior. The restoration adhered to the Secretary of the Interior’s Standards for Rehabilitation. As a result, it is eligible for listing in the California Register of Historical Resources. The historic exterior features and materials were preserved, while efficient contemporary use can be made of the structure. Interpretive panels were installed in a new outdoor plaza, detailing the history of the building and the florist industry.

Through the efforts to preserve the Contra Costa Florist building, and the research done on the early florist industry of the area, descendants of those original nursery families developed a deeper appreciation and knowledge of the significance of their own history. The Contra Costa Florist Building project represents a successful, community-centered public/private partnership that provides affordable housing for present-day residents while preserving a building richly tied to the community’s proud heritage.