In July 2020, Gov. Gavin Newsom announced he was making available $600 million to fund to purchase and conversion of hotels, apartment buildings and other structures for use as permanent housing for people experiencing or at risk of homelessness.

The initiative was a spinoff of the state’s Project Roomkey, which paid for counties to lease hotel rooms to temporarily shelter the homeless during the coronavirus pandemic. Most of the money allocated to Project Homekey, $550 million, came from federal pandemic relief funds. 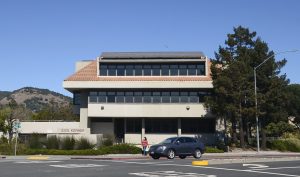 The county has already used Project Homekey funding to create housing at two other sites: an office building at 3301 Kerner Blvd. in San Rafael, above, and a hotel at 1591 Casa Buena Drive in Corte Madera.

Earlier this month, the California Department of Housing and Community Development announced that an additional $1.45 billion has: been allocated to fund Project Homekey. This time the bulk of the funding, $1.2 billion, will come from the federal American Rescue Plan Act of 2021…

…In November, Marin supervisors used Project Homekey funding to help underwrite the purchase of two buildings: a hotel at 1591 Casa Buena Drive in Corte Madera and an office building at 3301 Kerner Blvd. in San Rafael [VMWP project]. The two projects have ongoing operational costs of more than $1.8 million annually.

The state requires applicants seeking Homekey funding for permanent supportive housing to demonstrate adequate funding to cover operations and service costs for five years and a budget for 15 years.

Ashley Hart McIntyre, the county’s homelessness policy coordinator, said the state had indicated it would provide some money to provide supportive services in the initial round of Project Homekey, but actual funding failed to meet expectations.

“Most of the programs that received Project Homekey grants did not receive supportive funds,” McIntyre said. “They ran out of operations dollars.”

McIntyre said the Homekey project in Corte Madera received some operations funding, but the project in San Rafael received none because it was approved later.

If the South Eliseo project is approved to receive Homekey funds, ECS will retain ownership of the property, even though it is not contributing any money to buy the building or operate the housing.

”The county typically does not own housing,” McIntyre said. “The county took ownership in Homekey 1.0 due to the very rapid timeframe, but we are in the process of negotiating a transfer of ownership of those properties to our nonprofit partners.”

McIntyre said the state is awarding the new Homekey funds on a “first-come, first-served” basis, so there will be an effort to submit the site as soon as possible. Franet said the application is being released on Sept. 30, and ECS expects to submit its application around Oct. 15.

“ECS and the county currently have several additional sites under consideration,” Franet said. “At this stage in the process, we are not at liberty to disclose their specific locations.”