SF’s public housing was crumbling. Is a multibillion-dollar makeover the answer?

In late October, 58-year-old Rodney Randolph will move down the hill from his public housing unit in San Francisco’s once notorious Sunnydale public housing project to a fifth-floor apartment in a new building just completed two blocks away.

It’s a five-minute walk from the old spot to the new place. But it feels like a world away.

“Instead of facing these old Army barracks, I’m going to be facing the ocean,” said Randolph, an Army veteran who works odd jobs and volunteers for the Sunnydale Food Pantry. “I’ll sit back and look out at the water, the trees, maybe watch some birds flying.”

The building Randolph will be moving into is the first replacement housing at Sunnydale, a decaying and isolated 765-unit Visitacion Valley public housing complex, which has traditionally had the city’s highest homicide rate.

But it will not be the last. Eventually all the units at Sunnydale, spread over 50 acres at the foot of McLaren Park, will be replaced. 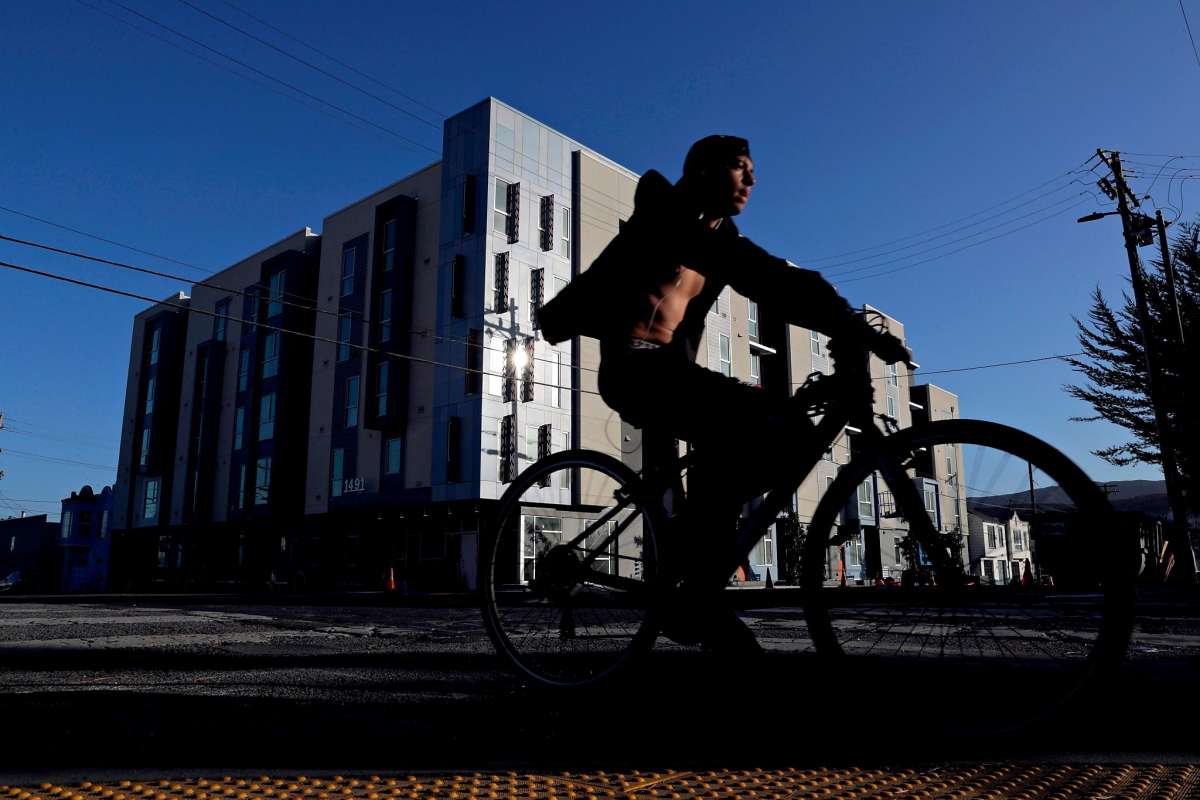 Mixed-income housing with modern amenities will add residents of the nearby Sunnydale housing project. Photo: Carlos Avila Gonzalez / The Chronicle

The opening of the first new building in Sunnydale is a major milestone in the city’s multibillion-dollar Hope SF program, a plan a decade in the making to rebuild public housing while adding market-rate and affordable apartments and condos. The idea is to economically integrate some of the city’s most neglected, isolated communities while adding new services and amenities that other residents enjoy — such as retail, green spaces, health clinics and community centers.

Hope SF will eventually rebuild 1,894 public housing units, while adding 3,226 apartments and condos, a mix of affordable and market-rate homes. The plan will remake four of the city’s most neglected communities — Sunnydale, Hunters View, Alice Griffith and Potrero Terrace and Annex.

While Hope SF was started more than a decade ago by then-Mayor Gavin Newsom, it is only recently that progress is obvious at all four developments, said Theo Miller, who directs the program.

“I feel for the first time in San Francisco history we can say without hesitation that all four sites are moving forward and the original families are moving into high-quality new housing,” he said.

At Potrero Terrace, the first replacement building opened last summer with 53 units reserved for existing public housing residents and 19 homes for low-income residents. Demolition and infrastructure work for 300 units across the street will start next month.

One of SF Hope’s biggest tests will come next year when developer City Ventures starts construction on a 64-unit market-rate development at Hunters View. The townhomes will be the first market-rate development in San Francisco integrated into a public housing complex. Some of the money generated from that development, both from a land sale and a cut of the profits, will go back into Hope SF — a minimum of $4 million, but more if sales go well.

City Ventures President Phil Kerr said the development’s comparatively low prices will appeal to first-time home buyers unable to afford the majority of new housing in the city. The project will be wood-frame townhomes, which means that it will cost less to build than typical mid-rise or high-rise project. 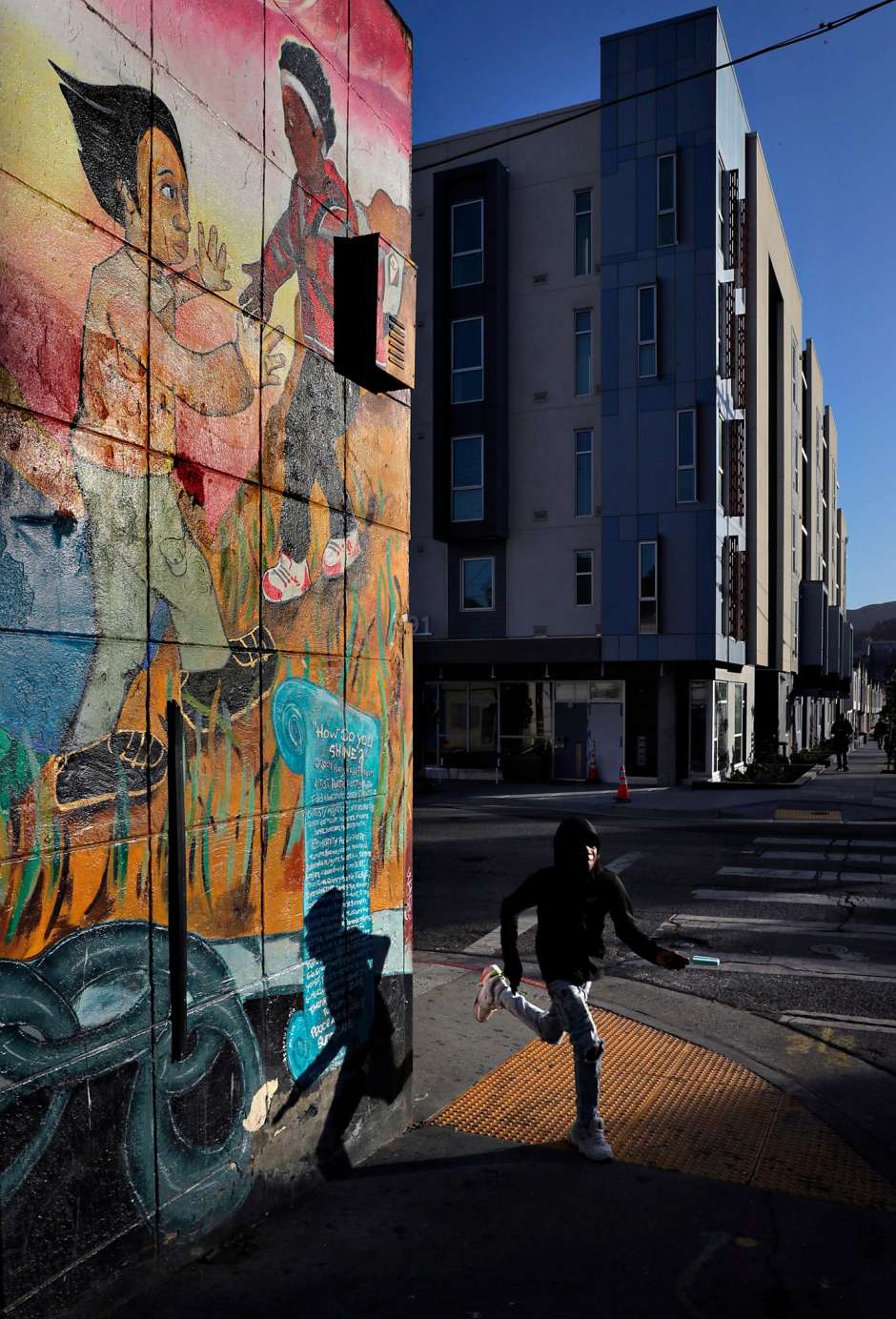 The mixed-use community across from this mural will accommodate families from the nearby Sunnydale housing project. Photo: Carlos Avila Gonzalez / The Chronicle

“Our projects are in locations that are really near the city core but places where you are not limited to doing a tower,” he said. “If you are building a tower in San Francisco, your construction costs are going to be $1,000 a square foot.”

“We want to make sure we do it when it will work,” Witte said. “It’s important to get off on the right foot so we can send a positive message for future offerings.”

Future market-rate projects at the Potrero Terrace site, which sits next to a neighborhood with multimillion-dollar homes, will probably generate the highest prices and therefore the most interest from market-rate developers, said Dan Adams, who heads the Mayor’s Office of Housing and Community Development. He said he expects all of the market-rate land deals to make money for Hope SF.

“We are excited for the true mixed-income component of the initiative to start to be realized,” he said.

The Hope SF program goes beyond just building new homes. The Partnership for Hope SF — an organization made up of the San Francisco Foundation, Enterprise Community Partnership and Mayor’s Office of Housing — has raised and spent $18 million to create health clinics, education programs and job training.

Those programs have put dozens of Sunnydale residents to work, cut crime and boosted school attendance, said Ellie Rossiter, who heads up the program at the San Francisco Foundation.

“The fact that we built the affordable housing before the market rate is the opposite of what has happened in a lot of cities around the country,” Shoemaker said.

Miller said that “Hope SF is the flip side of the argument of gentrification, which is a tricky conversation in San Francisco. You want the increase in investment, but you want to do it in a way that benefits the people already there.”

Many Sunnydale residents say life is improving in the neighborhood. Crime is way down. Shootings, which were a daily occurrence, happen much less frequently. For many years Sunnydale’s reputation was so bad you couldn’t get anything delivered there, said Stephanie Aimor, who has lived there for 22 years and will soon move to the new building.

“It’s like a regular neighborhood now,” she said. “You can walk around at night, exercise in the park. You see cable, UPS, taxis, pizza delivery guys. When you say Sunnydale now, they don’t hang up. They say, ‘We are on our way.’”

Even as the streets are more peaceful, the housing itself has not improved, residents said. Cabinets are falling apart. Walls are caving in. There is mold. Plumbing backups are common.

Joc Wilson, who works with youths in the neighborhood, said many of his Sunnydale neighbors are wary of the changes. For example, new units will come with higher costs — residents will have to pay water and electricity bills, which they don’t have to now.

“There are a lot of people who were murdered or died who I wished had lived to see this day,” he said. “I just hope the city does right by our neighborhood. It’s going to be a real drastic change.”

Miller said he sees Hope SF as a form of reparation for impoverished communities of color that have lived in isolated public housing without the basic services enjoyed by other San Franciscans. Still, progress has been painfully slow, and he understands why many residents are skeptical.

“Have we fulfilled our promises in a timely manner to do justice to the families of Hope SF? No. It’s gone on longer and much more slowly than any of us wanted,” he said. “We have got to move faster and work harder because families are living in unacceptable conditions.”

At a recent groundbreaking of the second new Sunnydale building, Mayor London Breed, who grew up in public housing, lamented that Sunnydale residents have long been “treated like second-class citizens.”

“The promises made to this community will not be forgotten,” she said. “We’ve got a lot of catching up to do.”