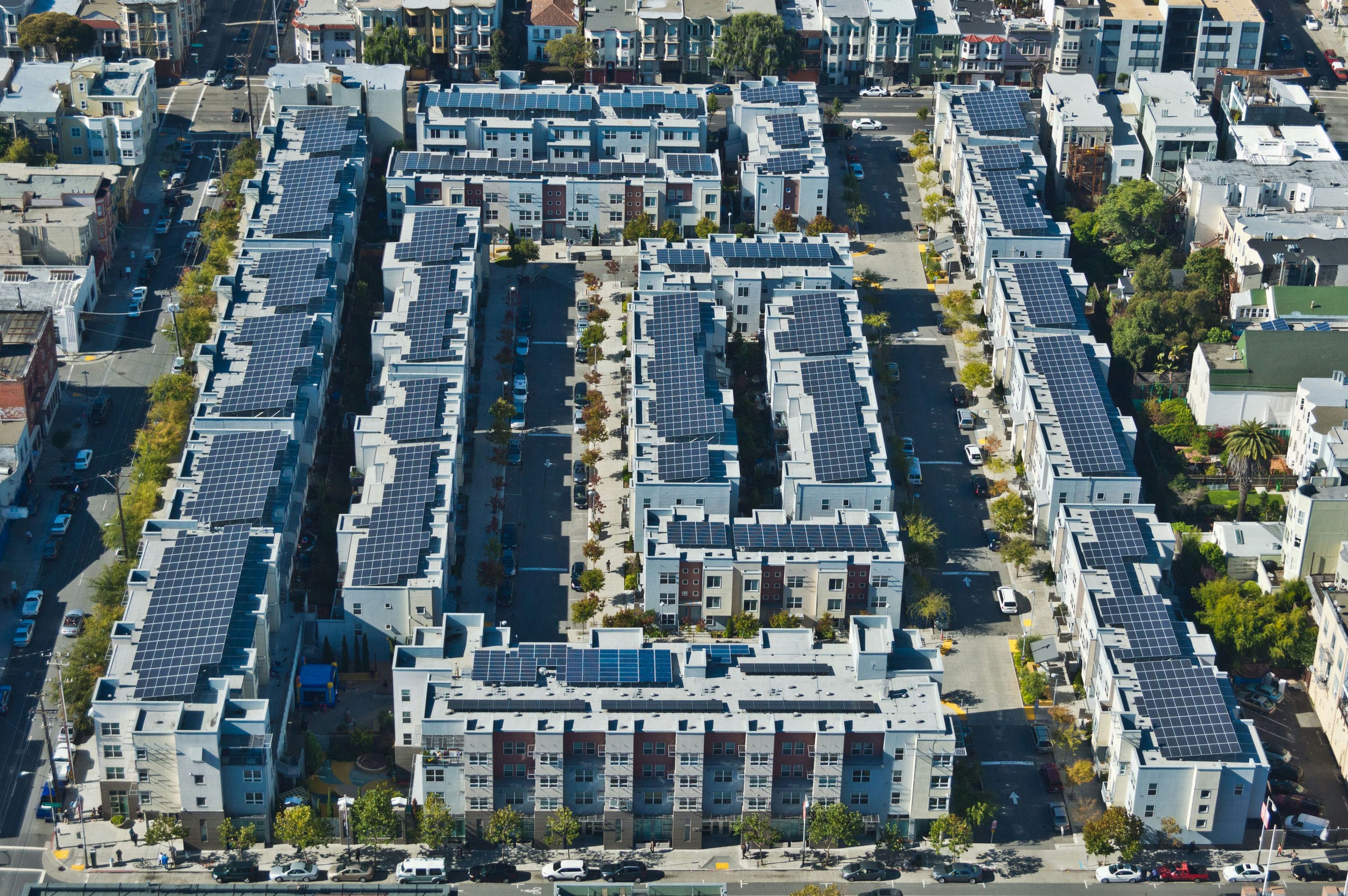 In the Mission, gentrification and displacement loom over daily life. Stories abound of wealthy newcomers pushing out longtime community members, skyrocketing rents, and local businesses changing to fit the tastes of a new class of neighborhood residents.

But for the people of Valencia Gardens, a 250-unit publicly subsidized housing complex on Valencia between 14th and 15th streets, the issue barely registers.

Instead, Valencia Gardens is a small oasis where residents have, by and large, stayed secure in their homes for years or even decades – even as well-to-do neighbors increasingly surrounded them.

The median household income in Valencia Gardens’ Census Block Group – an area bounded by 15th Street, Clinton Park, Dolores Street and Valencia Street — has risen to $78,000 in 2017, from $54,000 in 2012, according to the American Community Survey.

These changes make for stark differences in income between those who live in Valencia Gardens, where qualification to live there requires the household’s combined income to be below about $75,000, and the rest of the neighborhood that continues to get wealthier by the year.

The security of Valencia Gardens, however, means tenants there generally have few problems with newcomers moving into the neighborhood – many even see it as a plus.

“Nothing wrong with a little change,” said James Juarez, a newcomer himself who moved to Valencia Gardens with his family a little less than a year ago. Before getting a subsidized apartment in the complex, the family had been living with Juarez’s in-laws in San Jose.

He said he had heard bad things about Valencia Gardens and the surrounding neighborhood, especially before the complex was rebuilt in 2006. One visit, he said, changed his mind. He found the area around the complex to be safe and relaxed.

Valencia Gardens units on the “inside” of the complex open onto quiet public streets. Photo by Eric Murphy.

“This is a great neighborhood,” he said. For homes along Guerrero and Valencia Streets, Zillow estimates you’d be out anywhere from $1.4 million to more than $3 million, but rents at Valencia Gardens are only in the hundreds of dollars, depending on tenants’ income. Though residents don’t tend to frequent Four Barrel Coffee across the street, where a latte goes for $5, they manage just fine.

For many residents, if they have noticed changes in the neighborhood at all, they see them as positive.

“It calmed down a whole lot,” said Cassandra Reed, a home-care worker who lives here. She used to do work at the complex before its 2006 rebuild and says the neighborhood feels safer compared to previous decades.

She and her 17-year-old son, like most families at the complex, don’t spend much time at the upscale boutiques on Valencia, but they use the neighborhood in other ways. Her son goes to summer school and works at the Boys and Girls Club a block and a half away on Guerrero Street.

Residents at Valencia Gardens can’t be displaced by techies, whose high incomes would disqualify them from a required housing voucher. Their rent won’t skyrocket as the neighborhood changes, because it is either tied to their own income or the median income of the region. But they still enjoy the conveniences that attract newcomers — grocery stores, parks, and transit. For the families at Valencia Gardens, there is also the convenience of nearby public schools.

This means that Valencia Gardens and the upscale, busy, and gentrifying blocks of Valencia Street can feel like parallel worlds, stacked on top of each other but never really coming into much contact. Valencia Gardens tenants skip Foodhall, a newish corner store a block away that feels and costs more like an Apple store, preferring the Safeway on Market Street, only a 10-minute walk away.

A small sculpture garden near the main office of Valencia Gardens. Photo by Eric Murphy.

Since Valencia Gardens tenants are protected from displacement and rent hikes, gentrification is more of a background curiosity than a source of tension and conflict.

“Some of the restaurants are okay; there’s a nice Mexican restaurant up the block there,” said Deboreh Davidson, who has been living at Valencia Gardens since about 2010. “But the rest of them I don’t understand.”

“‘Do you feel connected?’” she asked herself rhetorically. “No, I don’t feel connected with any of these people.” But, while Davidson feels separate from the newcomers in the surrounding neighborhood and has complaints about loud nightclub revelers, ultimately she doesn’t find the changes brought about by tech workers threatening.

“I’m happy for them,” she concluded.

Recent research by the Federal Reserve Bank of Philadelphia argues that residents who manage to stay in neighborhoods as they gentrify can benefit from better job opportunities and children may be more likely to get a college education. The problem, especially in San Francisco, is that few can afford to stay. But places like Valencia Gardens are protected.

Natalie Pertsovsky, a disabled woman who lives in a ground-floor unit, moved to the U.S. from Ukraine 30 years ago, landing first in Cincinnati. She struggled and had to move frequently once she arrived in San Francisco, but got a spot in Valencia Gardens about four and a half years ago.  Doing so, she said, has stabilized her life and allowed her to manage her health issues.

Rocio Martinez has lived in Valencia Gardens for 24 years — her entire life — except when it was closed for most of 2006 while being rebuilt. She is now raising her two daughters in a unit facing 15th Street. She likes being on the “outside” of the complex, because there are fewer restrictions on how and where her kids can play and she can chat with people walking their dogs down the block.

Martinez has noticed many people have left the complex and new people have moved in, but says overall the feel of the neighborhood hasn’t changed much in her 24 years there. “I was running around the old ‘VGs’ pretty comfortably,” she said, adding that its reputation as a dangerous place in previous decades didn’t resonate with her. Today, she says, it’s a good place to raise her family. “It’s close to a lot of schools, it’s close to parks,” she said.

Other services that Valencia Gardens offers — like a food pantry and a computer lab — mean that, for the most part, residents’ needs can be met cheaply or for free at or within a couple of blocks of the complex. Most residents won’t notice when a beloved restaurant or artisan shop closes because it usually is not a part of their world to begin with. Few people mentioned friends in the neighborhood having to move away because much of their community is already in Valencia Gardens.

For Martinez, there’s little outside pressure to leave. The only obstacle she faces to housing stability for her and her daughters comes from within the complex: Its management, which ten other tenants Mission Local spoke to also expressed concern about.

Eviction for a lease violation is one of the few ways that residents at Valencia Gardens can lose their apartment. In previous years, residents say, laid back and collaborative management at the complex meant few tenants had stress or concerns about keeping their housing. Residents pegged a change in attitude to a new property manager named Carlos Uribe and other new staff members.

“The manager, he doesn’t care for us,” said Peaches Merchant, who lives in a unit on Meadow Court, one of the small streets bisecting the complex. She is not facing pressure to move from an eviction, but from a mold issue that she has had trouble getting management to deal with that has caused her health issues.

Shantel McClendon outside of her Valencia Gardens apartment. Photo by Eric Murphy.

As Mission Local previously reported, several residents described receiving eviction notices for small issues like not signing paperwork on time, parking problems, and putting signs on their front door, issues that they felt could be solved without threatening their housing. Management has recently sued to evict Shantel McClendon, a mother of five at Valencia Gardens, for having an unauthorized occupant who is no longer staying at the property, the latest suit in nearly two years of attempts to evict her. McClendon is awaiting a judgement in her case.

But if tenants can manage to avoid notices from management, there is little reason for them to do anything but stay put in a neighborhood that always seems to be on the move.

A high schooler named Gadiel who has lived on and off in the complex since 2010 said he has noticed minor details changing in the neighborhood, like Mission Pie closing and the cost of living increasing. He said that Valencia Gardens is secure for now but that could change. “I do believe, someday in the future, it will rise up too. Like every spot. This place isn’t immune,” he said. “I gotta get a job now, I guess.”