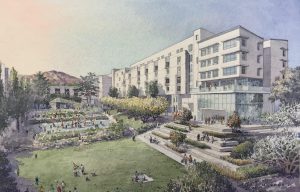 I am a resident of Ingleside and I live across the street from the proposed Balboa Reservoir development. The opinion piece published recently, ‘Board of Supervisors should say no to the Balboa Reservoir project,’ made a few explosive claims, but unfortunately these claims do not line up to the facts of the matter. Let’s set the record straight on the Balboa Reservoir: this will be a massive benefit to the community and is a tremendous opportunity that we would foolish to squander.

The Balboa Reservoir project is true income-restricted affordable housing, by every definition of low income standards. Twenty-five percent of the affordable units will be prioritized for educator housing. This means that one person with an annual income of $68,000 to $103,000, or a four person household with an annual household of $98,000 to $148,000, will be eligible for the units. These ranges are typical for City College of San Francisco and San Francisco Unified School District educators who struggle to afford housing, but who make too much money for traditional low-income housing. Seventy percent of the units are required to be for deeply affordable housing. This includes annual income for one person of $26,000 to $68,000, or an annual household income of $37,000 to $98,00 for four people. The project will also include 20 units of affordable for sale homes from Habitat for Humanity. The developer will fund 67 percent of the affordable homes, and the city will fund the remaining 33 percent from the affordable housing fund. Very little of the actual cost will come directly from the city’s budget. This is also a factor in the price the developer paid for the land to the SFPUC since the housing is being paid for by the developer and largely not the city.

The community input process has been lengthy and thorough with feedback given at every step of the process. The Community Advisory Committee (CAC) has met monthly to get community input since 2015 (at least 40 hearings to date!). This input has led to key community benefits. The project will include four acres of public open space, an approximately 100-seat childcare center and a Community Room that can be used by anyone in the neighborhood. Additionally the project will contribute approximately $10 million in transportation sustainability fees to the citywide transportation system.

I’ve spoken with my neighbors on the matter and we are all incredibly excited about the project. The city really can be proud of going about this process the right way. This project is providing 550 greatly needed affordable units at very little cost to the taxpayer. At a time when the city needs housing above all and the budget is incredibly strained, we can’t let this opportunity slip away. The Board of Supervisors should enthusiastically approve this project and the many benefits it will give to our City College, our neighborhood, and our city.

Submitted on behalf of Southside Forward by Steve Marzo, an Ingleside resident.