“Did you hear about the rose that grew from a crack in the concrete?”

City officials and community stakeholders gathered on a windy Thursday to break ground on the Rose on Colfax, a housing complex on the corner of East Colfax and Valentia Street in the East Colfax neighborhood. 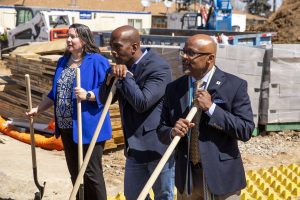 The five-story, 119,ooo-square foot complex will feature 86 units of affordable one-, two-, three- and four-bedroom units. The apartments will be income-restricted to those making between 30% through 70% of the area median income. For a family of four, that would be between $31,450 and a little over $68,120. According to the Department of Housing Stability, land use restriction on the property ensures affordability for 99 years.

The project has been years in the making. The now-vacant lot was once PT’s All Nude II, a strip club that closed in 2016, roughly a year after someone was fatally shot on the premises.

The site was purchased by the City for $1.3 million and was later sold to housing developer Mercy Housing Mountain Plains. The total project will cost around $29.4 million, with funding coming from the Colorado Housing & Finance Authority and the city’s housing department, which contributed $3.5 million.

Denver City Councilmember Chris Herndon spoke at the groundbreaking, saying the project was something East Colfax residents have wanted since his tenure began as their city representative.

“I remember walking the streets with community members…and them stopping in front of PTs and saying, this place needs to go because they are not serving our community,” Herndon said. 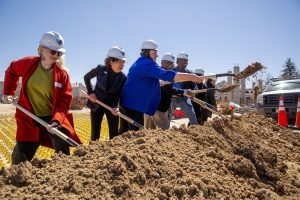 Greene is originally from Park Hill but moved to East Colfax about 11 years ago. She’s a member of the East Colfax Community Collective, an advocacy organization led by residents and business owners.

“When he said this neighborhood feels forgotten… it’s so true,” Greene said. “No sidewalks. Lack of childcare. Lack of everything. So many families are forced to move out because of the lack of affordable housing. I hope this actually houses people and brings community and a safe space. We need a community without gentrification, without white-washing. An authentic community.”

Greene is also a teacher and sees firsthand how a lack of childcare can affect residents.

The childcare center will be run by Mile High Early Learning, an organization focused on providing education to under-resourced children.

“This part of Denver is considered a childcare desert, which means either there’s no childcare or there’s more than three children needing a spot for every licensed spot available,” said Dr. Pamela Harris, president and CEO of the education group. “We’ll be offering 48 slots for babies, toddlers and preschoolers. We’ll be providing comprehensive services through Headstart and early Headstart, health, nutrition, family support services.”The childcare services will be subsidized depending on income levels. Funding for the center was also provided by Mile High United Way. 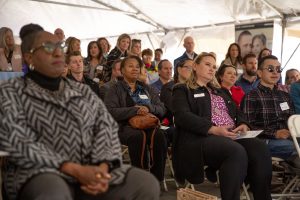 “I believe Denver is for families, but it’s going to take all of us to recognize that there are all sorts of families and we have to work harder to make sure there is a safe place for every family that wants to call Denver home,” said Christine Benero, president and CEO of Mile High United Way.

The Rose is set to open next year. According to Mayor Michael Hancock, the City is helping fund 1,220 affordable units currently under construction across 25 sites in Denver. An additional 840 units are in the planning phases.

“It’s fitting,” Greene said. “It’s the aesthetic of something being maintained. We don’t want a strip club. We don’t want murders. We don’t want unsafe streets. But if we flip everything and scrap everything, we yearn for the past. I’m so disheartened sometimes when I see places from my childhood. The Northside, Park Hill, all these places I can’t recognize. I hope this brings positive change that is inclusive and fights displacement.”