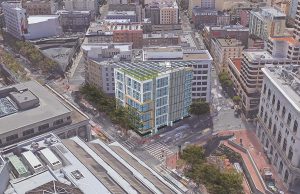 Van Meter Williams Pollack has been shortlisted to proceed to final phase of the Reinventing Cities Competition, for Hallidie Plaza in San Francisco.

Last week we announced the 82 teams of architects, urban planners, developers, entrepreneurs, environmentalists, and neighbourhood collectives that will compete in the final round of the Reinventing Cities competition in their cities. The shortlisted teams can be found HERE.