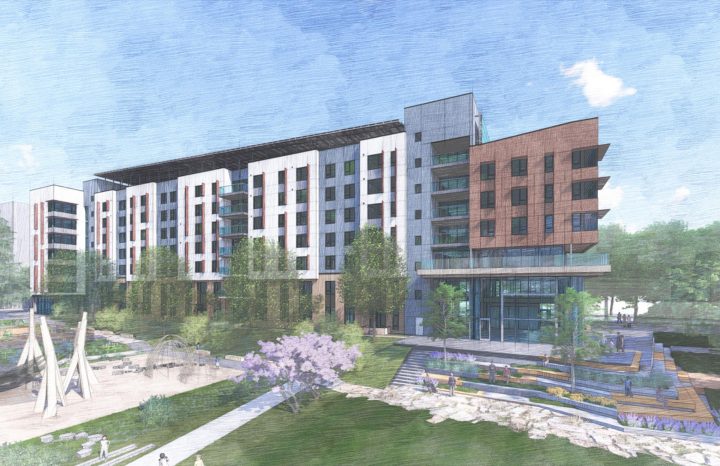 A rendering of Bridge’s 124-unit affordable project at Balboa Reservoir made public by San Francisco. The project received $29.6 million in funding from the AHSC program. VAN METER WILLIAMS POLLACK

The funding is awarded on an annual basis to affordable housing projects that promote car-free lifestyles, according to CSGC. The committee began its Affordable Housing Sustainable Communities program in 2014.

“Our goal is to fund not only affordable housing, but affordable housing in places that have access to active transport and transit,” said Saharnaz Mirzazad, deputy director of community investment and planning for CSGC.

CSCG this grant cycle awarded a total of $808 million to applicants representing 37 projects across California — its largest grant round since the program launched, Mirzazad said. Grants are funded by the proceeds of auctions held by the California Air Resources Board’s cap-and-trade program. Stakeholders participating in quarterly cap-and-trade auctions buy up the state’s available carbon credits, which allow owners to emit a certain quantity of greenhouse gasses.

Approximately two-thirds of the capital given to the 12 Bay Area projects, which together encompass around 1,400 units, will go toward the construction of housing, its website shows. The remaining one-third will fund those transit-related improvements. (For a complete list of projects awarded funding this round, click here.)

For example, San Francisco-based affordable developer Bridge’s Mayfair El Cerrito project, which will raise 69 affordable units adjacent to the El Cerrito del Norte BART station, was awarded $26.9 million. Of that, just over $17 million will go toward the construction of housing, said Smitha Seshadri, senior vice president of development at Bridge. The remainder will fund transit infrastructure and related programs — things like bike lane improvements or BART fare vouchers for residents.

The funding awarded to Bridge’s Mayfair project accounts for between 25% and 30% of the estimated project cost, making it a huge get for Bridge, Seshadri said.

“It puts us on a good track,” she told me. “It allows us to proceed with developing project drawings and get ready to start construction in the fall of next year.”

Bridge also received funding for its 124-unit affordable project on Block E of Balboa Reservoir, part of a larger 1,100-unit project it is developing jointly with team of developers that includes Virginia-based AvalonBay Communities in San Francisco’s Westwood Park neighborhood. Nearly $10 million of the total $29.6 million received by the Block E project will go toward transit improvements and programs at Balboa Reservoir, documents from CSGC show.

“It’s a linchpin for that infrastructure,” Bridge Executive Vice President Brad Wiblin said, citing improvements the project will make to area bike lanes and pedestrian access to the nearby Balboa Park BART station. Bridge, which strategically partnered with Bay Area Rapid Transit on its application, will also use a portion of its award to buy a new BART car.

The remaining funds for the housing project will play a crucial role in helping Bridge secure additional financing needed for the development, Wiblin said. Affordable housing developers often compete with each other at the state and federal level for limited pots of funding available to affordable housing projects; the more funding a project has, the easier it is to secure additional funds, Wiblin said.