“I like to say we’re an example of a community who said they were tired of waiting to be rescued, so we’ll rescue ourselves. We’re passionate about Montbello, and it’s important for folks to know we built this.”

The neighborhood group behind the project expects it will break ground sometime in January.

The finishing line for a long-awaited Montbello community project centered around affordable housing and an accessible grocery store is in sight.

Denver City Council has agreed to reserve $19 million for the Montbello FreshLo project, which will include housing, a supermarket, retail stores and a cultural center. 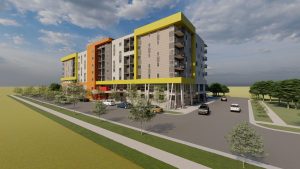 The massive community project has been in the works since 2018 and was initiated by the Montbello Organizing Committee, a registered neighborhood organization.

Donna Garnett, executive director of the MOC, said the project was born from necessity: Most Montbello residents live about four to five miles from a grocery store.

The Hub, as the project is dubbed, will be a 7-story building comprised of 97 one-, two- and three-bedroom affordable housing units. A majority of the units (55, to be exact) will be for those making 60% of the area median income.

“This project will be owned by the community, not a developer,” Garnett said. “We want this to be an antidote for gentrification. And we want the people who have lived in this community for two, three generations to stay.”

The building will also hold a two-level grocery store, several retail spaces and a cultural hub that’ll include performing art space. And yes, there will be parking.

The project will cost around $55 million to $57 million, with funding coming from various lenders, grants, investors and potentially Denver if City Council approves, Garnett said.

She said the deadline for funding proposals from potential investors and lenders is May 26. She said the project will hopefully break ground in January.

Garnett said the Hub will be in the heart of the residential area of Montbello, which will ease commutes to outside grocery stores for residents.

She also said that the building will be constructed by Montbello residents.

According to Julie Smith, the city’s Department of Finance’s communications director, City Council will consider whether to approve the bond in the fall.

Until then, Garnett said the MOC will continue to look for funding and stoke interest in the project.

“This project is unique,” Garnett said. “I like to say we’re an example of a community who said they were tired of waiting to be rescued, so we’ll rescue ourselves. We’re passionate about Montbello, and it’s important for folks to know we built this.”