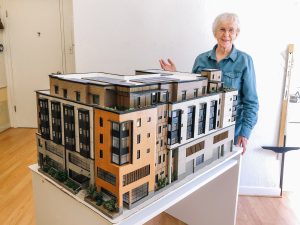 Sally Lewis turned down a request to create a scale model of the proposed Whistlestop building planned for San Rafael. She is no stranger to creating scale models of buildings. She even spent a portion of her art career creating amazing scale models of people. These life-size sculptures were snatched up by celebrities like Daniel Steele, and commissioned by well-known figures such as financial executive and philanthropist Charles Schwab.

Lewis enjoys taking on a challenge and admitted, “I said no to Whistlestop initially. A week later, I turned 90 and I was feeling a bit guilty for refusing. Once I saw the (architectural) plans, I thought it might help them raise money and inspire others, to know that a senior like me could create a model of this wonderful design that includes new housing for seniors and a new home for Whistlestop.”

What she didn’t know at the time, was the incredible detail work involved in creating a replica up to her own design standards. Lewis began making scale models as a communications tool.  “I was married to a man who was a gifted mathematician, but he had trouble with spatial concepts. I got interested in scale models when we wanted to build our first house, and he didn’t grasp the design ideas I had. So, I built a scale model to show him. I’d repeat it any time I wanted to remodel. I built two different home scale models for one of my sons, as well.”

In March, Lewis received the architectural plans for the six-story, 67-unit senior affordable housing and activities building for Whistlestop. BioMarin has donated about 15,000 square feet of the northwest corner of a 3 acre-site at 999 Third St., valued at $1.2 million for the project. The location is the former Pacific Gas and Electric Company property.

Lewis wanted to complete the scale model by the end of June. The pressure mounted in mid-June, knowing that the San Rafael’s Design Review Board voted unanimously to support Bio-Marin’s proposed project. “I wasn’t sure if I could stay with my timeline. This design has a lot of unusual detailing. I had to invent everything that I was using.”

The building has over 220 windows of differing dimensions. Lewis explained, “I was working at one-quarter scale, meaning one-quarter inch equaled 1 foot. I ended up having to use corrugated board from Michael’s to find material thin enough. When I painted one side of the board to match the color of the building material, it warped. At first, I wasn’t sure what to do, then I painted the other side of the board to even it out. It worked, but the paint caused some of the paper on the board to blister, so I had to iron it. Cutting the plastic to fit all those windows was a challenge, but Tapp Plastics sold me just the right thickness to cut with a scissors. Then I had to experiment to find the right glue to bond the plastic to the board.”

Working from drawings and plans supplied by Rick Williams, with the architectural firm Van Meter Williams Pollack, LLP, Lewis brought her project in under the deadline.

Jennifer Golbus, marketing strategist at Whistlestop said, “We were just amazed when we saw it. Such attention to detail, and it is so much larger than we first imagined. Sally put so much work into the model. Right now, it is with the architect who is just adding some trees – Sally did all the rest. Once we get it back, it will have a prominent place in our active aging center. Everyone is invited to come and see it.”